Star of light is the sign of power and light that illuminates the spiritual path.

The Flaming Star is the center from which the true light radiates, the sacred Fire, the inexhaustible source of life and the universal seed of all beings . the Flaming Star symbolizes, from the esoteric point of view, the human genius, understood as a ray of divine Light. The philosophical focus of the Alchemists, or the vital spark. The passages, or phases of the alchemical opus it is a slow, progressive transformation, seeking the necessary wisdom, until it reaches the ethereal and luminous consistency of the philosopher’s stone or “Enlightenment” and merges with the “Quintessence”, the purest life force of all. complete of the ego with the soul, which implies the opening of the Heart and the ability of the individual to act consciously in his fluidic or astral body, that is, the definitive realization, the body of light, the body of glory. soul, thanks to which it becomes possible to travel in the astral world with the new body as a vehicle. “

In alchemy, power over matter and energy is but a means. The true end of alchemical operations is the transformation of the alchemist himself, the achievement of a higher degree of consciousness. The material results are only the promises of the final result, which is spiritual.

In the Red Opera the Magician quiets his physical body so that the five senses remain inactive – as in the state of meditation – so he temporarily withdraws his consciousness into thin vehicles thus opening his eyes on those floors, and finally can lead to term the Great Work “alchemization” the transmutation of the Lead (the physical body) the Gold (Spirit) after having already passed through the Silver (Soul). Only by acting as a soul does he have the power to spiritualize the body through the element of Fire – the vivifying Spirit, which descend upon him and the self-awareness given by the development of the soul, that is, the identification of man with his Self.” The great cosmic work is reflected in the Little Work within man. La Piccola, like the Great Work, is based on 4 elements (4 Elementary Quality) 3 Philosophical principles; 2 Elementary Noble Metals and the Philosopher’s Stone.

Already traces of alchemical thought are already known since the Iron Age and in particular from the ancient culture of China. Chinese Alchemy was founded on the basis of the alternation of two complementary principles called YANG-YIN – which generated a union of YANG (Sky – Sun – Male) opposites YIN (Earth-Moon -Female), able to realize between them inversion of active and passive properties generally symbolized by a circle in which a double inverse rotation spiral generates a black pole in a white semi-field and vice versa a white pole in the other semi-field black. It is the realization of mystical union, which makes man undivided, One with Existence. It is the last degree of contemplation: after having realized the presence in itself, the Adept is aware that he is One with the ALL, that he is the Tao himself. SAPIENZA is always in us, but it is routinely disturbed by desires, it is all confused; with contemplation, it returns to its natural purity. Little by little it becomes clear; then we call it Heavenly Light (tian guang). No new science has been produced; it is already there, it is enough to realize it.

Visualization, inner vision are the initial steps to be taken when one aspires to a living spiritual life and therefore true, when one aspires to walk the Way of the Dao. It is not enough to retreat into a silent room where you can concentrate for a few minutes, briefly exclude the influence of the outer world and reach the quiet state of the Heart. This is only the beginning, even if a good start.

The legend of the Holy Grail (Chalice which had contained the blood of Christ on the Cross) was interpreted as the search for the “lost word”, that is, a revealed truth to be sought from which to draw the wisdom necessary to carry out the discovery of the Philosopher’s Stone. “There is a Science of the Three through which the human can return to Home at last as the Integral Being that he was. INTEGRAL is INTE – GRACE … INTE – GRAAL …” IN THE GRAAL “

The connection with the four elements is technically fundamental: the passage from the earth (solid state) to water (liquid state) to air (air or vaporous state) and then to fire (light), marks the successive transformations and sublimations of matter which progressively disintegrates until it reaches the ethereal and luminous consistency of the philosopher’s stone or enlightenment. (The connections with the four seasons, the four moments of the day and the four ages of man suggest the cyclicity of the opus. (Curiosity: Luther saw in the opus the symbol of the resurrection)

The four natural elements are at the same time considered visible and invisible, physical and spiritual the word “earth”, for example, refers not only to the planet on which we live, but also to the phenomenon of solidity, foundation and stability , concept that among other things is also one of the cornerstones of Alchemy. Then there is also a fifth element, called “Quintessence” which is the purest life force of all and in some respects the harmonic fusion of the four natural elements that together make existence possible.

The symbolism attributed to the “Four Elements” was as follows: The Cosmos is the expression of an organized and ordered whole. Everything in the Universe, at the macrocosmic and microcosmic level, is arranged according to a precise equilibrium, regulated by cosmic laws. Originated from a primordial chaos the elements (fire, air, water, and earth) are at the basis of the order of things and of the organization of the Universe. Each element can not exist without the other, having the ability to mutate into each other. Elements based on precise characteristics are subdivided into active and passive, superior and inferior. Fire and air are active elements, since they act on an object to modify it, while water and earth are passive elements, since they indicate stasis. The first (fire and air), more subtle (spiritual), are considered perfect and therefore superior to the latter (water and earth), and can act on the latter by raising them. But the water and the earth, inferior elements, have the ability to attract the higher ones to themselves, lowering them. At the esoteric level a fifth element is added, which incorporates the four traditional elements, the ether

The 4 natural elements and the 4 alchemic phases – The passages, or phases of the alchemical opus, were commonly four:

Earth, Air, Fire and Water. These four elements make up everything in different proportions, so they are the basis on which creation is affirmed: without, nothing could exist. The particularity of these elements in alchemy, however, should not be analyzed only in their physical composition, but also and especially in the symbolic and spiritual: in practice alchemy every element is connected by two qualities with the dominance of one of the two. This is to emphasize that each element can physically transform into another for the simple principle that everything is connected. These are related to the four seasons and to the lunar cycles and solar cycles.

But the elements are not only material substances, but also different stages of our consciousness, our mood, our life. But as the great alchemist and physician Paracelsus claimed, the four elements and the material world are subject first of all to three “substances” known as; Sulfur, Mercury and Salt, these represent the Sulfur the Soul, the Mercury the Spirit the Salt the body.

The changing of each element into another had made the alchemists think that, based on this principle, they had given the idea that by working on the elements contained in the lead this could be transformed into gold. Moreover, always in practice, the elements represent the five most important phases of the transmutation and of the Great Work: Nigredo, Albedo, Citrinitas and Rubedo.

The Rubedo is evaporation is the operation that transforms solid matter into a gaseous substance. It is the moment of the dynamic movement of opposites. By becoming aware of one’s own contradictions, a sense of centrality can begin to take shape. This stage is characterized by the encounter with the archetype of the Self. This archetype is the sum of the path of individuation, the end of the individual who unfolds before him, like a blossoming flower. This archetype represents the individual himself, all that he has seen and accumulated on the way. If the individual has encountered the Self it means that the ego is aligned with it. Not going there simply means that the route is not yet finished. Thus we arrive at the crowning of the alchemical work, the mystical marriage of the opposites, the conjunct. These marriages are possible only if, previously, the opposites have been differentiated (spirit / matter, conscious / unconscious, light / shadow). The opposites are united in a unity in which, paradoxically, everyone continues to be what it is, but has become part of a larger totality. 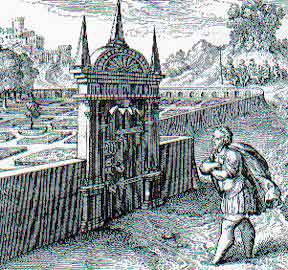 The narrow perspectives of materialism have made us forget that the soul is essentially, as the etymology of the term suggests, from anemos, wind, an internal breath connected to the breath, a question that emerges in all sentient beings pushing them to look for a sense for their lives and to connect their interior with the outside, the microcosm to the macrocosm. This question can be neglected or cultivated, just as we can remove from our consciences the relationship with pain and death or use these realities as ways of inner transformation. It is certain that the deafness of the modern world towards the questions posed by the soul has terrible consequences: each one is occupied solely by his own personal destiny and becomes incapable of seeing the subtle bonds that hold the peoples together and allow civil coexistence among the nations , you also lose the ability to see with your heart, to see your way through the labyrinth of happening, you become blind to beauty wherever it manifests itself in what surrounds us, in everyday objects, in the buildings in which we live , in the wonders that characterize Nature, in the immortal spark that inhabits every living being. For this reason many human beings become available to destroy beauty in all its forms.

“Every man hides in his heart, a cup which has the power to receive in itself a” source of water that gushes for eternal life “(Jn 4:14) and that makes that part of the Virgin Land that we carry in us fertile.”